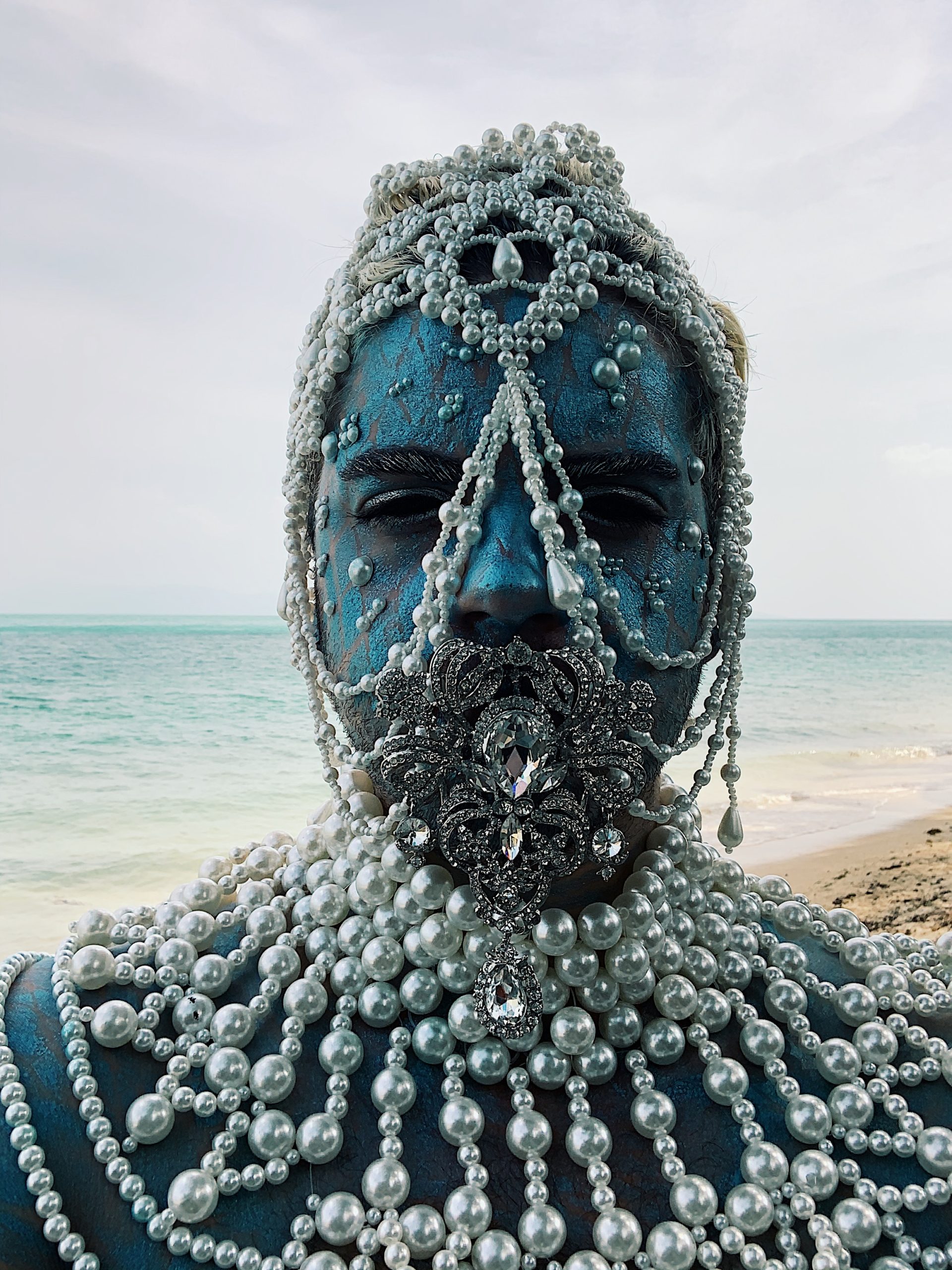 There are a lot of stories about the great seas, which often includes creatures living in the seas in many different shapes and forms. Almost everybody heard about those creatures, but almost none have ever seen one.

For my visuals, I’m often inspired by myths and stories from the past which have a cultural and spiritual meaning. In my work, I often try to capture and visualize the unexplained and unknown. Not because I love fantasy stories, but because I love to realize fantasies and make them visible to the eye.

After visiting the exhibition from Thierry Mugler in the Kunsthal I was completely in love with the Underwater section, and all the costumes inspired by fish, shells, and sea life. From that point on I started collecting images that inspired me for my own visual.

As I told earlier, in my other blog about my trip to Thailand, I found two handmade chest-pieces in a store in Bangkok.

After carefully trying to negotiate the price I decided to buy both pieces because of course, I couldn’t decide which one I loved the most.

Normally I love to create all the costumes and pieces myself, but these pieces are just too perfect. The pieces are completely made from pearls, and it would take hours for me to create by myself.

I love how sometimes the unexpected can turn out to be the missing link. Since my visit to the exhibition of Thierry Mugler, I was thinking about creating a visual inspired by the underwater world. But until I stumbled upon the chest pieces in Bangkok I didn’t have a clear vision. After finding the chest piece I was sure that these items would become a part of my series about dreams.

TRY OUT ON LOCATION.

From that point on I was trying to find a nice location in Thailand. After visiting many beautiful locations I decided to do the shoot on Koh Samui. The beaches on Koh Samui are beautiful and relatively quiet.

I wanted to incorporate the different shades of blue, from the sea and sky into the make-up. Luckily I brought some blue make-up, and pearls with me, and it all came together very well. For the make-up, I decided to use a panty to create the diamond shapes on the face.

Now it was time to shoot, and it was a challenge. After a few hours, we decided to call it the day. After carefully screening the images when I came home I decided that I wasn’t going to use this shot for my series because it didn’t really match the rest of the series. But rest assured, I recreated this shot in my studio when I came back!

When I came back from my holiday I decided to do a remake of the shoot I did in Thailand. The shoot in the sea turned out to be a little bit too human and real for my taste. This time I wanted to make sure that the image would fit in with the rest of the visual in the series. Now my goal was to create a visual, which could appeal more to the imagination of the viewer.

At first, I started building the set design with an iridescent foil that has the look and feel of colorful water.

For the other parts, I used a mirrored foil which reflects the light really beautiful on the creature and adds a liquid surreal effect to it all.

From there on I applied the make-up, this time it took me a bit longer because I added some more colors to it. I added some green and pink to match the make-up with the set design.

Below you can check out the backstage video with footage from my shoot in Thailand, the shoot in my studio, post-production, and of course the end visual!
I’m also currently trying out some after-effects on the visuals I’ve already made, I also added this try-out in this video!

Studio Rik Versteeg is a visual artist based in Rotterdam. Creating alternative realities through photography, video, design and make-up. Proud member of the Queer community.